Richard Allestree was born in Shropshire, and educated at the free school in Coventry before he came up to Christ Church in 1637. After only six months his potential was recognised by Dean Samuel Fell and Richard Busby, his tutor, and Allestree was elected to a Studentship which entitled him to a regular stipend and a position for life. Soon after he graduated BA, Allestree joined the Royalist army and served throughout the Civil War. He is renowned for trying to save many of the college's treasures from the Parliamentary forces. After the fall of Charles I, however, and the arrival of the Parliamentary Visitors in the city to whom Allestree refused to submit, he was expelled from the University. In 1660, he returned to Oxford and was made a canon of Christ Church. With John Fell, son of Samuel, and John Dolben, Allestree set about putting Christ Church back onto an even footing after the years of turmoil. He was the first to move into the new north wing of Tom Quad when it was completed in 1665.

In 1663, Allestree was appointed Regius Professor of Divinity. He was a noted scholar and conservative, anxious not to permit the propounding of any doctrines which might create controversy, but tolerant. For a man who had served in the army throughout the Civil War and seen the horrors of faction first-hand, this stance is not surprising.

Allestree died in January 1681, and left in his will his library of around 3500 to the University of Oxford for the use of the Regius Professors of Divinity. As the professorship is attached to a canonry at Christ Church, the books have always been kept here in a small room over the cathedral cloister set up specifically for them. In 1946, Christ Church formally took over the collection from the University. 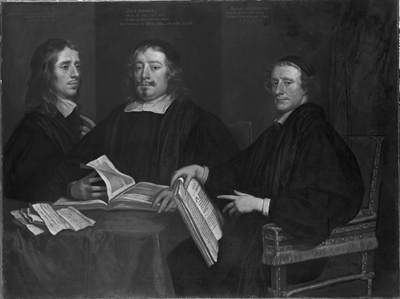 We should be grateful for your comments
as to how we could improve this Web site.
Please send comments to tileweb@ashmus.ox.ac.uk. Thanks.